Don’t butter me up!

Don’t butter me up!

I was 18 and studying for my A-levels. One Saturday, I turned up for my part-time job at the local superstore and got hauled into my boss’s office. It turns out I’d made a mistake at work the previous week. A very, very big butter-based mistake… 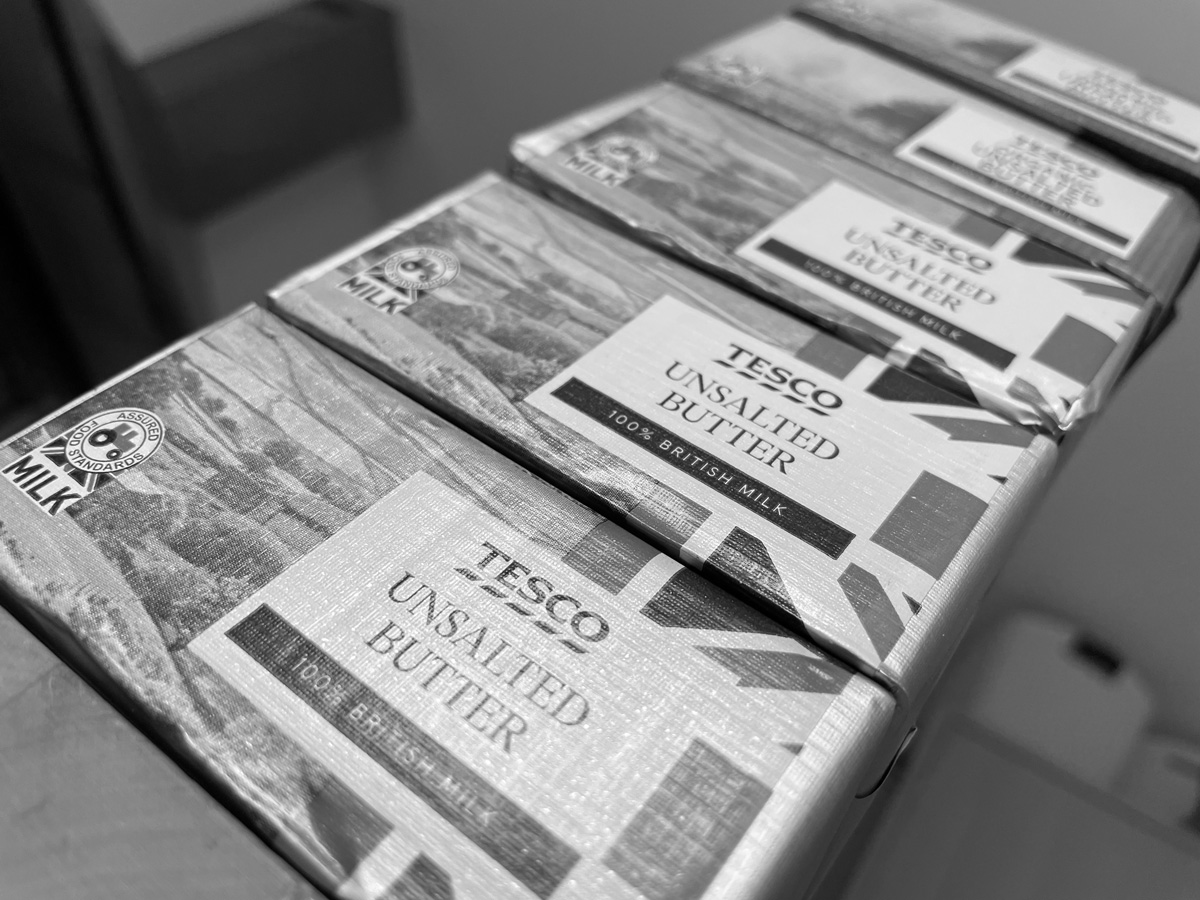 Part of my role in the fresh-food office at Asda was amending orders. I would go through printed lists of products being sold or used within the bakery, butchery, produce and provisions departments.

The managers of each department would write the new figures on the printed lists and change the quantities being delivered the following Tuesday. I’d then key the changes into a computer.

So, if sales of Dairylea Triangles were suddenly up due to a TV ad campaign, more might be needed. Or if unexpected bad weather meant a fall in pineapple purchases, fewer would be required.

Most products were ordered by the case, and most orders were for a couple of cases (maybe up to 4).

Each department had at least several hundred product lines. Amendments were usually needed on 25–50% of these lines. I must therefore have be altering the orders for around 500 products each Saturday.

Back to my boss’s office, and I’m in the hot seat being read the riot act. I’d got an order amendment wrong the previous week. And not just wrong, but very wrong.

The order was for a particular brand of butter. It was supposed to have been changed from 4 cases to 3. But I’d changed it to 43.

And 43 cases of butter had duly arrived on Tuesday. Enough not for a day of sales, but a fortnight. My boss was not happy about this buttery blunder and made it clear how terrible I was at my job.

I felt bad… but also perplexed.

I’d been doing the job at Asda for about a year. So, 500 changes a week multiplied by 50 weeks equates to around 25,000 amendments. I thought that just the one significant typo – while unfortunate and embarrassing – was an acceptable level of human error.

But more than that, I was confused about the system.

The store was ordering four cases of this butter a day at most. So why did the ordering system (or the team at the distribution centre picking and loading the orders) not query the sudden skyrocketing to 43 cases?!

It seems absolutely nothing was in place to question this bizarre boom in buttery requirements.

I was reminded of that episode this week when our weekly home-shopping delivery arrived from Tesco. (On Tuesday, strangely enough.)

In a similar (but infinitely smaller) way to the old process at Asda, we order or groceries a week or so in advance. We then tweak our order nearer the day, depending on what’s in the fridge and cupboards. Sometimes I do this, sometimes Laura, my wife, takes care of it.

This week, due to a bit of miscommunication, we both did it.

And we both decided we needed butter… and one pack more than usual two. We each added the butter to the order and so ended up with three times more than normal.

Six packs are now crammed into the fridge door. Better than 43 cases, but still a bit of a nuisance.

The value of helping people to NOT buy stuff

Most online shops are adept at prompting you with suggestions for additional products based on what you are looking at, are about to buy, or have bought before.

Tesco’s online checkout process includes a step that shows you a list of items you usually buy if they are not in your basket this time around. “Did you forget something? You usually buy these things too…”

My slip up at Asda was 30 years ago. I reckon they will have updated their system and processes by now to immediately query the likes of an order for 43 cases of butter.

With more and more people venturing into the realm of online shopping, companies such as Tesco would do themselves a favour by adding something similar.

Many new online shoppers are older folk. For example, Waitrose reports a threefold increase in online shopping by the over 55s. And many in this age group find the process a bit of a nerve-wracking one.

A 2020 YouGov survey found that 39% of older shoppers feel the information in online shops is unclear and makes the shopping process more complicated than in real shops. On top of that, even the most tech-savvy of us are prone to the occasional mistake.

On the one hand, it favours this week’s sales at the supermarket for us to mess up and order more than we need.

But it would favour long-term loyalty and respect – and give confidence to web-shopping newbies of all ages – to flag up the unusual and the outliers in our online orders.

Not the two packets of biscuits instead of one or the inclusion of an item you’ve only bought once before, just the things that are seriously out of sync.