How to win a war of words

How to win a war of words

A visual battle has been taking place on the sides of a bridge over the A46 near Bath. The white team and the grey team have been slugging it out for months. So far, the white team are way ahead. If the grey team want to strike a winning blow, they need to change tack… and colour.

The white team believe Covid is a hoax and are determined to let the world (or the part of the world that travels up and down the A46) know about it. Their weapon of choice is white paint and blunt slogans about fake news, the BBC and the ‘lie virus’.

The grey team are the folk from the local council. They are armed with grey paint, which they use to obliterate the white team’s words.

So far, the white team are winning. And from my position as an armchair-paint-battle pundit, I have them well ahead.

Their typographically untidy rants are almost always on display, while the council’s efforts to blot out the messages seem to keep them at bay for a few days at most.

There have been at least three rounds of this battle over the last year. The current messages are FAKE NEWS on one parapet and UN-MASK THE LIE VIRUS on the other. These have been in place and unchallenged by grey paint for at least two months.

The success of the council’s next paint-over-it-in-grey approach is likely to be as short lived as all the previous efforts. Blotting the words out simply gives the white team a nice plain canvas for their next rant.

A new approach is needed if the council want to win this particular war of words.

One solution (of sorts) would be to set up covert cameras to catch, identify and then prosecute the white-paint-wielding perpetrators.

But would a fine or a far-off court case stop the graffitists or their pals sloping off to the bridge with their brushes?

So here are two alternative approaches that tackle things a little differently. The key to the ideas is that they don’t get rid of the rant, they just make it impossible to read.

1. A neat idea that works by being anything but neat

The white team’s messages could be made illegible by painting the width of the parapet with a series of wobbly white vertical lines.

The approach would use less paint than the current tactic of covering most of each parapet in grey. What’s more, it would be quick and simple to action as the pattern is purposefully unregimented.

To counter attack, the white team would need either to find a colour that stood out against the white and the dark background of the grey concrete, or paint over the whole lot in a one colour before painting a new message in another.

Both scenarios involve time and effort that the graffitists may not be willing to invest. And even if successful, it’s quickly undone with a bit more wobbly line work. 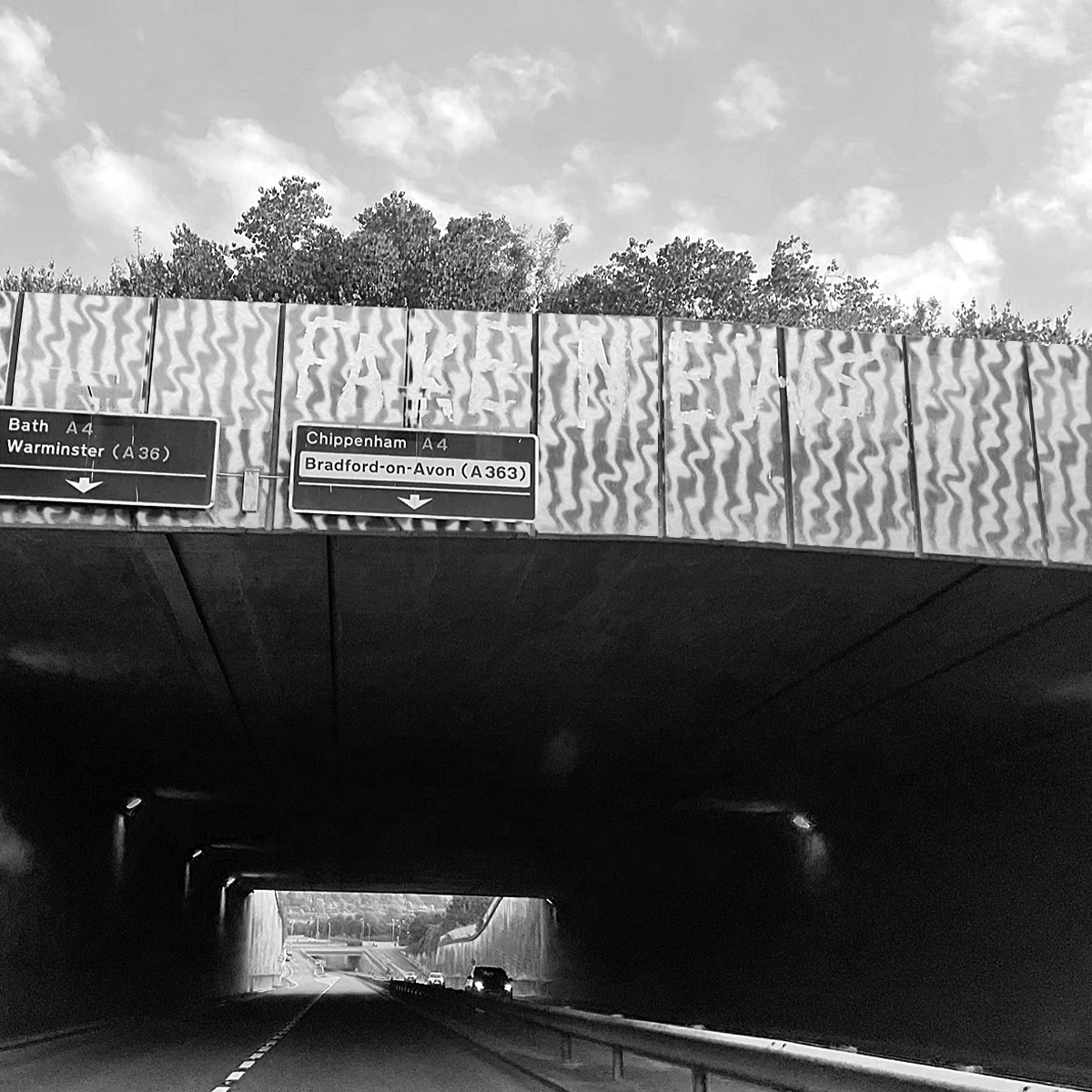 Anti-grafitti concept using random white lines. The ‘Fake News’ text is still in place but has been made illegible.

2. Don’t remove the graffiti, add to it!

Rather than out-painting or obscuring the white team’s messages, a few swift carefully considered brush strokes could simply diffuse the messages – or completely subvert them.

The angry war cry of FAKE NEWS could become a cuddlier statement such as BAKE OFF NEWS. With the message diffused (or confused) the white team would need some dark paint to return the words to their original form.

But the speed and ease of creating innocuous or humorous alternatives allows this new approach to be actioned far more quickly and cheaply than the current unsuccessful method of blotting the whole message out.

A step further would be to tweak the message so that it conveys the exact opposite of what its creators intended.

UN-MASK THE LIE VIRUS could easily become UN-MASK THEN DIE: VIRUS ALERT! In this scenario, the perpetrators of the original graffiti have essentially done 90% of the work towards shooting themselves in the foot. 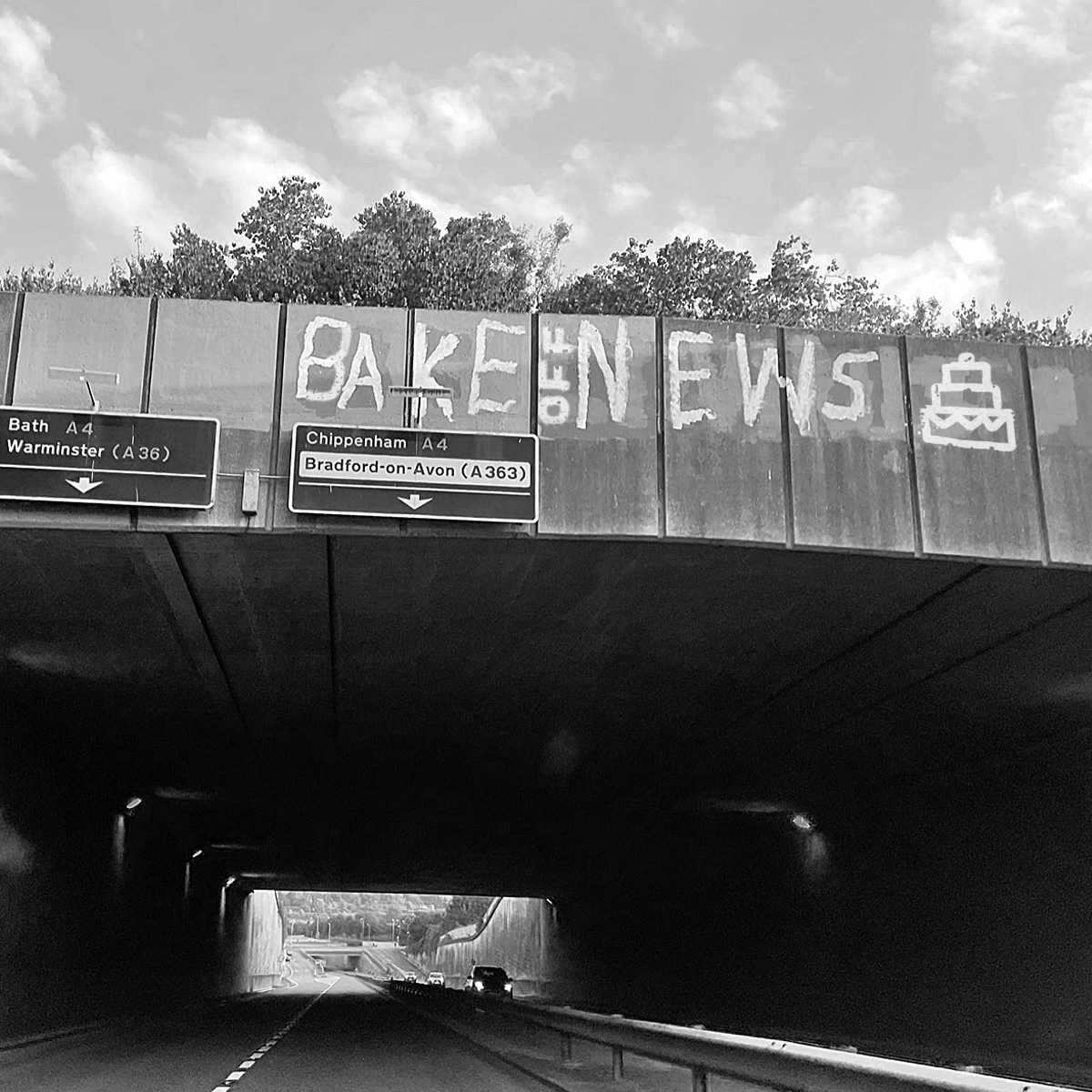 Anti-grafitti concept that diffuses or subverts the original message. 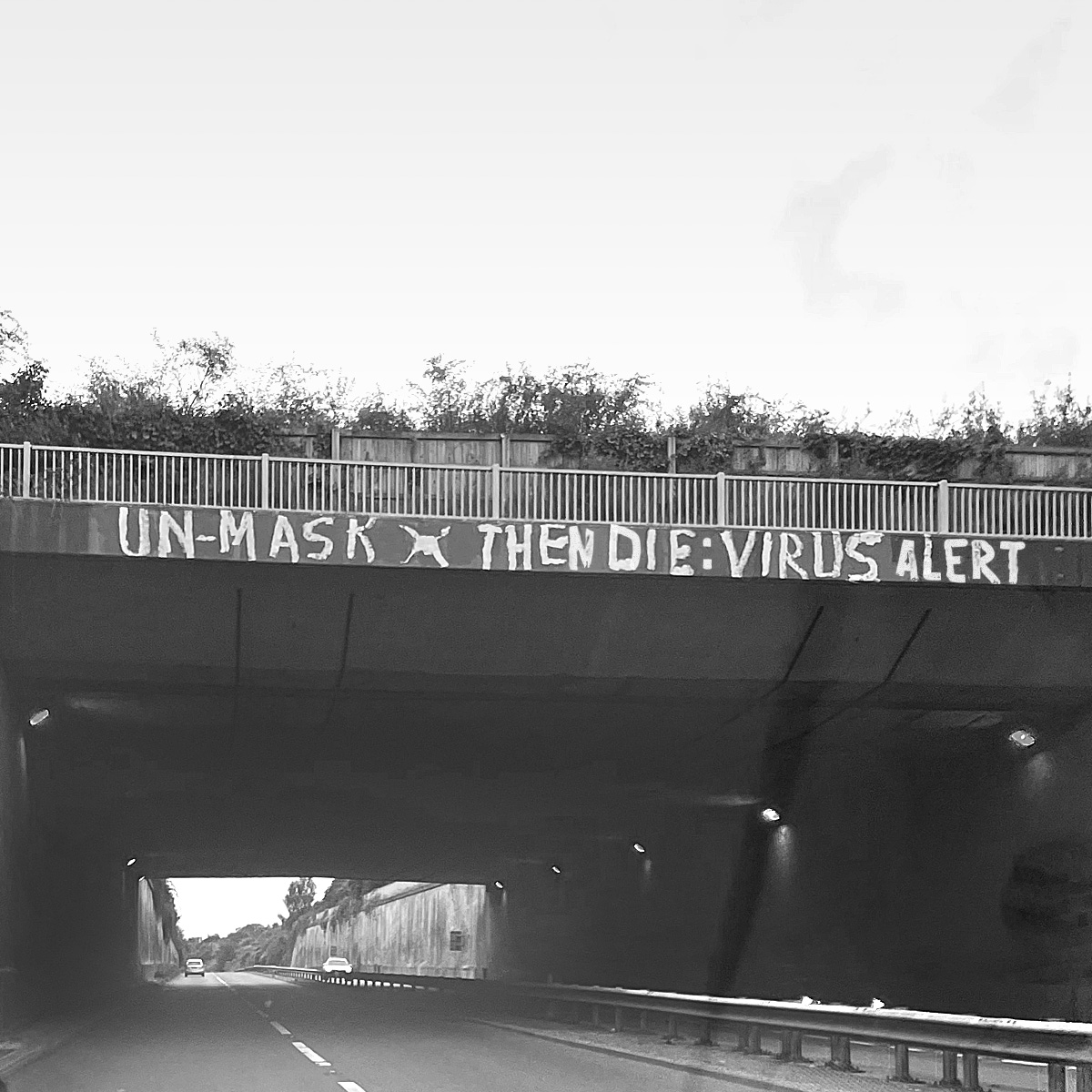 Winning by fighting a different battle

Difficult or intractable problems of all kinds are sometimes solved by simply thinking about them differently.

Here, technically speaking, both my ideas add to the graffiti rather than remove it. But that’s OK if the problem is reframed from one of graffiti removal to the similar but subtly different aim of preventing angry and offensive messages from being seen.

The approach to solving the former – painting over everything in grey – is proving comparatively costly, time consuming and short-lived in its success.

The approaches to the latter could be cheaper and faster, and might well mean the writing is on the wall for angry rants over the A46.