Stands full of postcards used to appear outside almost every shop at the seaside. But on a day trip to Padstow last month, postcards were noticeable by their absence. It turns out that J Salmon, Britain’s oldest postcard printer, went out of business at the end of 2017. Did the sun really need to set on this 137-year-old company? 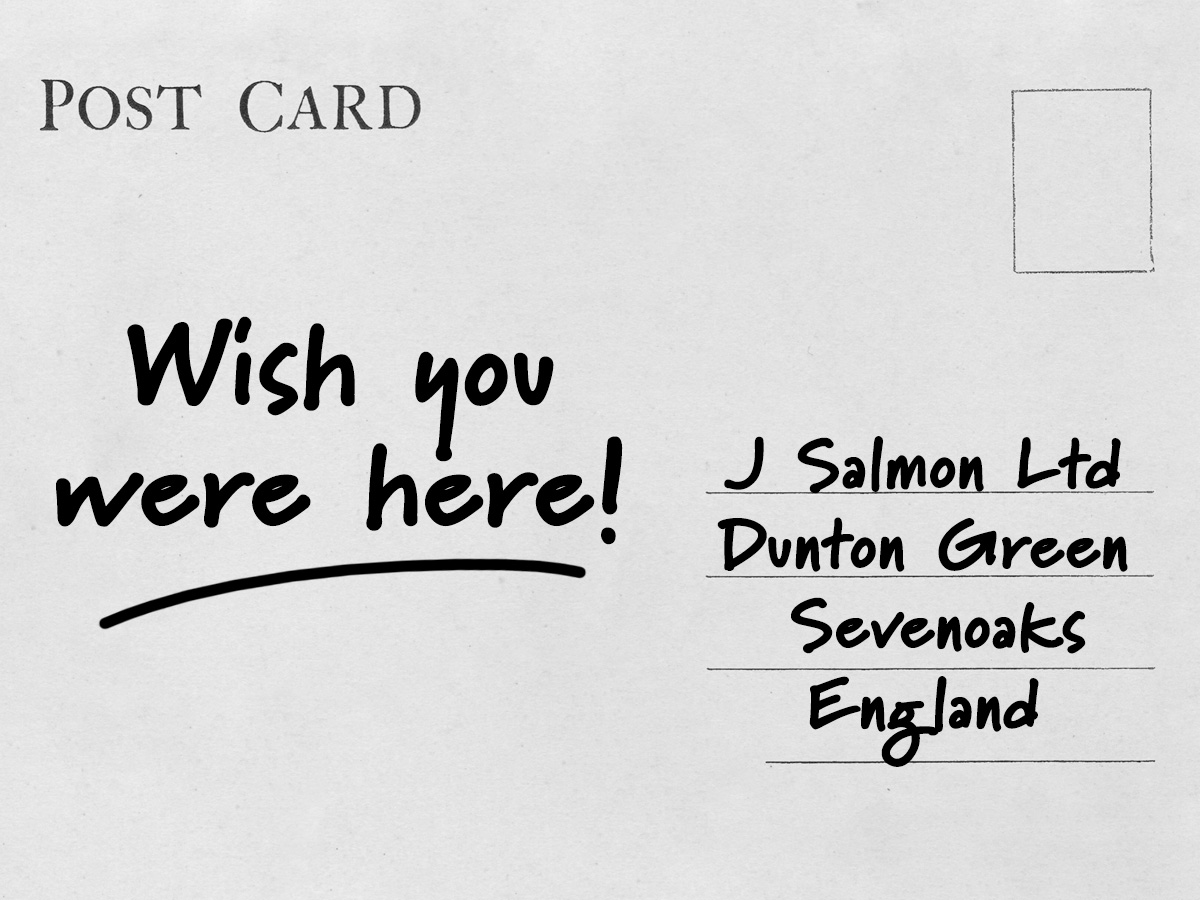 They focused on the function of running railroads, not on the needs of customers who wanted swift, efficient ways of travelling long distance.

So, with the advent of air travel, railroad companies failed to see the opportunity of this great new way to meet their customers’ needs. They subsequently missed the (flying) boat and paid the price.

J Salmon may have made the same kind of mistake. They seem to have viewed themselves as a postcard-printing business rather than what they actually were – a social media business.

In fact, they cited social media as one of the two key reasons for their demise, underlining the thought that this was not an industry they saw themselves as part of.

It’s said that the persona we create on social media is not who we are, but who we want to be.

Postcards perform a similar function. Photos on postcards of perfect blue skies, turquoise seas, and golden beaches used to be way, way better than your own holiday snaps.

They let us show friends and family the holiday we wanted them to believe we were having.

Sending gorgeous photos plus a “Weather is lovely, wish you were here” message is really about elevating our status in the tribe by showing people something we are enjoying that they are not.

Your aunty, neighbour, friend or colleague saying, “I got your card… looked like you had an amazing time!” is the offline equivalent of someone clicking the Like button and adding some heart-eyed emojis.

And for decades – certainly throughout the 20th century, and in the time before Facebook, Instagram and incredibly capable cameras on our phones – postcards were the best way of performing this kind of social interaction.

The second reason J Salmon cited for their downfall was the trend towards shorter holidays.

No longer are the masses enjoying ‘factory fortnight’ by the sea, but taking several mini breaks of a few nights. This, in J Salmon’s view, rendered the sending of postcards somewhat pointless as people arrive home before their postcards do.

This is certainly a consideration, but it’s not the only or most important source of friction that sending a postcard entails.

Back in Padstow, even when I did spot a shop with a small carousel of colourful postcards, I found myself put off by the effort involved in what seems like a simple holiday tradition.

I had no cash. Would the shop take a contactless payment for a 50p postcard?

I had no pen, so I’d have to wait till we got back to our cottage before writing the card… or I would have to pony-up and buy one.

I had no stamps, so I’d have to see if the shop sold them, and if so would they sell me one or would I have to shell out for a book of six?

I had no idea where a post box was, either here or near our cottage.

(If you’re abroad, all of this may come with the addition layer of friction that is a language barrier.)

On top of all that, if you’re sending lots of cards, there’s the faff of writing much the same message on every one. Heck, when I was at school, that kind of thing was meted out as punishment for bad behaviour!

And then, of course, there’s the cost. 50p to £1 for a card, almost another £1 for a First Class stamp, and you’re looking at a tenner to tell 5 friends the same thing you can tell 150 for free on Facebook.

Faced with all of this, I thought sod it, gave up on the idea of buying a postcard and took another approach…

What J Salmon could have become

Some of my older relatives aren’t on social media, and friends and family members of all ages still love to receive cards through the post.

So in the face of the problems of purchasing and posting a postcard from Padstow, I reached for the MyPostcard app on my phone instead.

This app (and others like it) lets you upload one or more photos, arrange and edit them, write a message, and create a postcard that is printed and posted for you.

No need for cash, pens, stamps or post boxes. Plus you can send a bunch of cards en masse and use the same message on each one. Simple.

What’s more, the cards I sent via the app during our short break in Cornwall landed on my parents’ and relatives’ doormats before we got home.

MyPostcard is an example of what J Salmon could have become.

In fact, J Salmon had the wherewithal to create an app that was signifcantly better than MyPostcard.

For starters, they could have made their library of tens or maybe hundreds of thousands of images available.

If your own photos were not up to scratch, if the weather was crap, if you didn’t quite get up the hill to the viewpoint, if you didn’t get to snap the famous local wildlife, you could pay to use shots from the library.

And to drive engagement, GPS could be used to verify or unlock access to geographically organised groups of photos. You want pics of the boats in the harbour at Padstow? If the app knows you’ve been there or to the general area, here they are. Go explore to access more!

Given the infinite shelf space that the internet affords, the app could become a marketplace for other imagery too.

Artists and photographers in an area could supply images, compile promotable galleries, and receive payment for images that are sold. “Buy and send postcard-sized prints of my paintings of Padstow via this link.”

Oh, there’s an interesting twist when it comes to cost.

The price of sending a card using MyPostcard is almost double that of sending a traditional postcard (around £2.50 with the app).

That may have some questioning the idea, but people happily pay a premium for convenience. (For example, it’s why folk order a Domino’s delivery rather than making a pizza themselves or going to the shop and buying one.)

The extra quid or so with MyPostcard is therefore a small price to avoid the efforts of the old way of doing things.

And while it’s also more than the ‘free’ Facebook or Instagram option, sending a physical card is likely to get you more kudos from the people who receive it – and that’s pretty much the real point of it all.

Remember to step back a bit

As any holiday photographer knows, to get everyone and everything in the picture you’ve sometimes just got to step back a bit.

Sadly, it seems J Salmon didn’t step back to get a better view of their customers, their market, and the new opportunities afforded by technology.

The sun may have subsequently set on their company, but it’s certainly not set on the unsung social media channel that is the postcard.