How much is my Starbucks coffee?

How much is my Starbucks coffee? 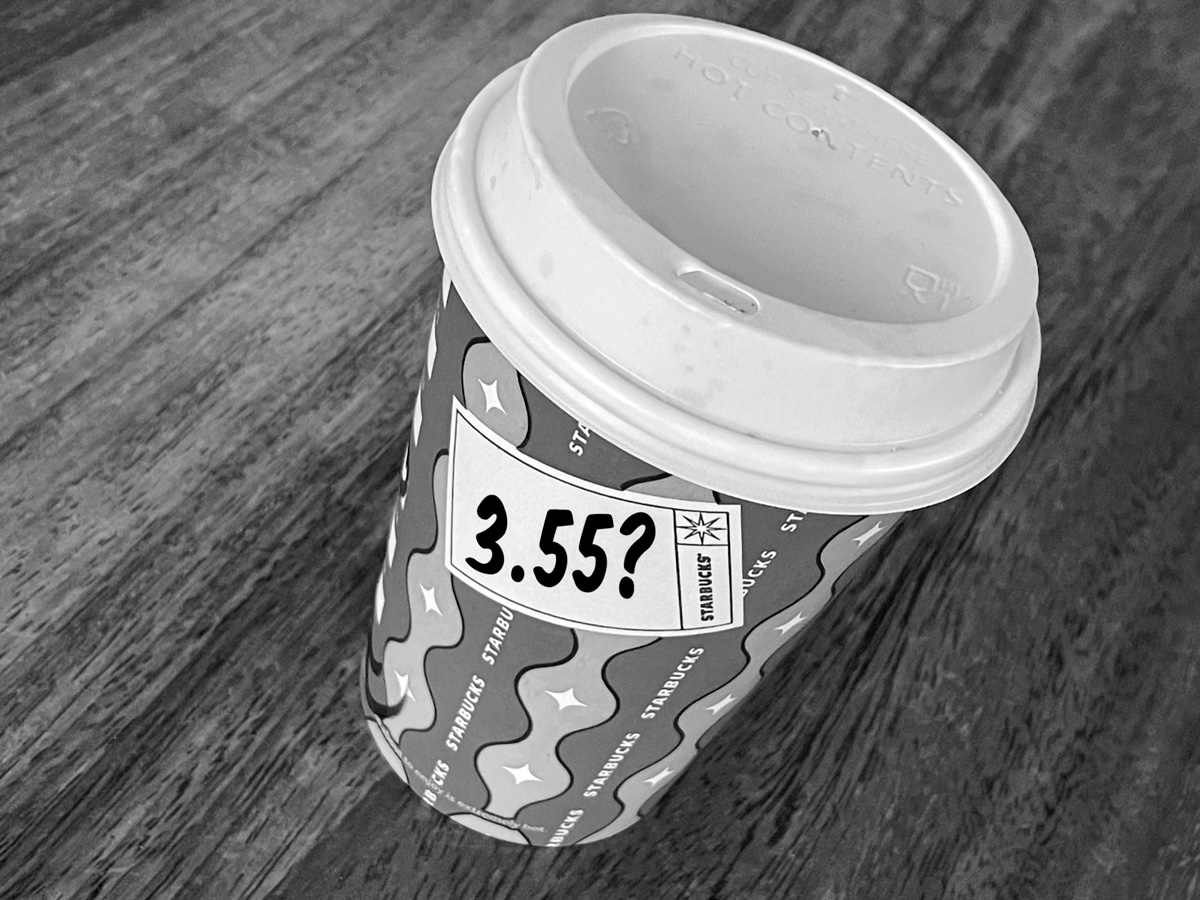 Not, this is not a trick about flavour shots or alternative milks. (The latter are free in Starbucks in any case). This is just about a straight-up tall latte, nothing added.

It was busy, there was a queue behind me, and it was only 5p too much, so I let it slide.

A few days later, I was again charged £3.60 but the store was quieter, so I queried it.

“Ah,” says the guy, pointing to the bottom of another board nearby, “It’s an extra 5p for the cup!”

Is it me, or is this a weird way to price things? It’s not like you can have the coffee without a cup, is it?

Yes, I know, you can (and should) bring your own reusable cup.

Fair enough, yet that seems to leave the £3.55 oddly adrift as it’s a price you can never actually pay. You’re either using one of their cups and paying £3.60, or doing the green thing with your own cup and paying £3.30.

So, what are they thinking here? Any idea?

Here are my guesses:

“A 5p cost for carrier bags in shops massively reduced their use, let’s do the same with cups”

After the government mandated a small charge for single-use carrier bags, they reported incredible results. Around 8 billion single-use carriers were dished out by the major supermarkets in 2014, but this shrank to to 565 million in 2019-20 and continues to fall.

A similar nudge could work with single-use coffee cups, couldn’t it?!

Make the cup a paid-for option, and like supermarket shoppers, people will bring their own cups to avoid the 5p fee.

But what works in Sainsbury’s can’t play out the same in Starbucks.

If you go to the supermarket and either forget your own bag or you don’t want to buy a single-use carrier, you have other options.

If you’ve just a few items, you can avoid buying a bag by simply carrying stuff in your hands and pockets. With more items, you can wheel your trolley out to the car and pop everything into the boot. As such, bags are a convenience not a necessity.

With coffee, however, a cup is distinctly necessary. Making it look like an optional extra on top of the price of the coffee feels pointless and confusing.

After all, you can’t say, “Nah, forget the cup, just pour it into my hands!”

Some may feel highlighting a comparatively large reward for bringing your own cup will encourage large numbers of people to do so.

But there are two problems.

First, offering customers a reward for bringing their own cup has been shown to be ineffective.

Bristol-based café chain Boston Tea Party (BTP) tried a 25p discount but found only a pitiful 3% of people brought their own cups.

As a result, BTP took the brave decision to ban disposable takeaway cups altogether. This forced customers to bring their own cup, buy a reusable ‘eco-cup’, or rent a loan cup.

BTP even wonder whether offering the 25p discount and having a low take-up actually suits the large chains. After all, profits would be clobbered if the deal had a huge response. (And it would massively reduce the number of cup-shaped adverts for coffee shops that we see people carrying around.)

The second problem is behavioural science has shown people to be motivated more by aversion to losses than the desire to make savings.

For example, in his excellent book The Choice Factory, Richard Shotton outlines an experiment regarding messaging to encourage people to switch energy provider. Highlighting a £100 loss by not switching was 45% more effective than wording the message around a £100 saving.

It is therefore likely to be more effective to present Starbucks coffee and cup prices differently and reframe things in favour of a potential loss than a potential saving.

Price the coffee at £3.30 on the proviso people bring their own cup, but charge an extra 30p if customers need to use a disposable one.

Starbucks will have their reasons for the way they present their prices. But if I felt like I had been overcharged and left befuddled by the weird way the numbers were presented, others will be too.

And serving up a convoluted confuse-accino of costs will never lead to anything good for Starbucks’ profits, or their claimed aim of helping the planet.